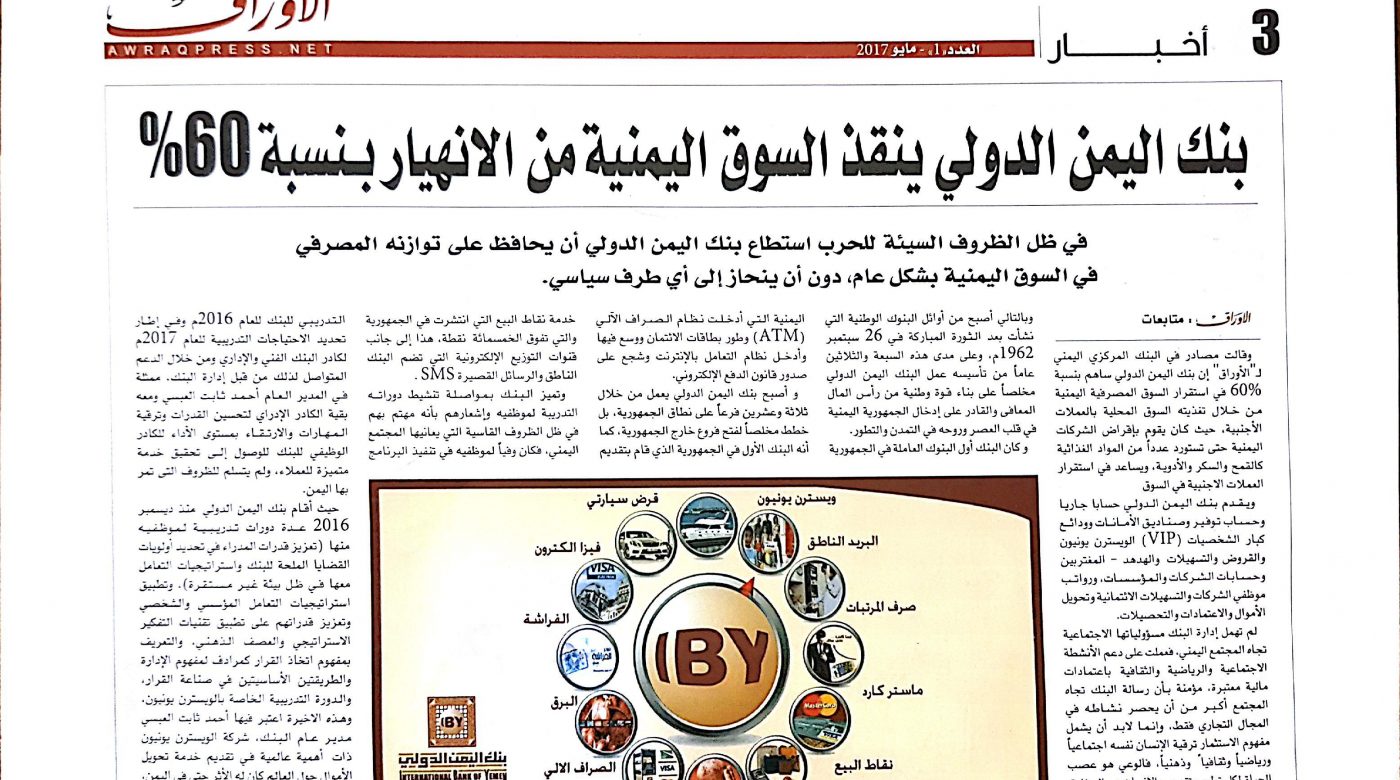 In light of the bad conditions of the war, the International Bank of Yemen was able to maintain its banking balance in the Yemeni market in general, without favoring any political party.

Sources in the Central Bank of Yemen told Al-Awraq that the International Bank of Yemen contributed 60% to the stability of the Yemeni banking market by feeding the local market in foreign currencies, as it was lending Yemeni companies to import a number of foodstuffs such as wheat, sugar and medicines, and help in stabilizing Foreign currency in the market

The bank’s administration did not neglect its social responsibilities towards the Yemeni community, so it worked to support social, sports and cultural activities with significant financial credits, believing that the bank’s mission towards society is more than limiting its activity to the commercial field only, but the concept of investment must include the promotion of the person himself socially, sports and culturally Mentally, consciousness is the lifeblood of every development and progress, and man is the greatest creature capable of creation and creativity.

The International Bank of Yemen was established in 1979, and thus it became one of the first national banks to emerge after the blessed revolution on September 26, 1962 AD. Over the course of this thirty-seven years of its foundation, the International Bank of Yemen has worked sincerely to build a national strength of healthy capital and able to enter the Republic of Yemen At the heart of the era and its spirit in urbanization and development.

The bank was the first operating bank in the Republic of Yemen to introduce the ATM system, develop credit cards, expand and enter the Internet dealing system, and encourage the issuance of the electronic payment law.

And the International Bank of Yemen has become operating through twenty-three branches nationwide. Rather, it has sincerely planned to open branches outside the republic. It is also the first bank in the republic to provide point of sale service that has spread in the republic that exceeds five hundred points, in addition to electronic distribution channels. That includes the speaking bank and SMS.

The bank was distinguished by continuing to revitalize its training courses for its employees and notifying them that it is interested in them in light of the severe conditions experienced by the Yemeni society, so it was loyal to its employees in implementing the training program for the bank for the year 2016 AD and in the context of defining the training needs for the year 2017 for the technical and administrative staff of the bank and through continuous support for that by the bank’s management Represented by the General Manager Ahmed Thabet Al-Absi and with him the rest of the administrative staff to improve capabilities, upgrade skills and raise the level of performance of the bank’s staff to reach the achievement of a distinguished service for customers, and he did not receive the conditions that Yemen is going through, as the International Bank of Yemen has held since December 2016 several training courses for its employees, including (Enhancing the capabilities of managers in setting priorities for the bank's urgent issues and strategies for dealing with them in an unstable environment), applying institutional and personal coping strategies and enhancing their capabilities to apply strategic thinking and brainstorming techniques, and defining the concept of decision-making as synonymous with the concept of management and the two basic methods in decision-making, and the training course Of Western Union, the latter in which Ahmed Thabet Al-Abssi was considered as Director of A. Mother of the bank, Western Union Company is of global importance in providing money transfer service around the world had an impact even in Yemen, where it continued to provide its services to Yemen despite the conditions in the country currently, and the high risks that accompany such conditions.