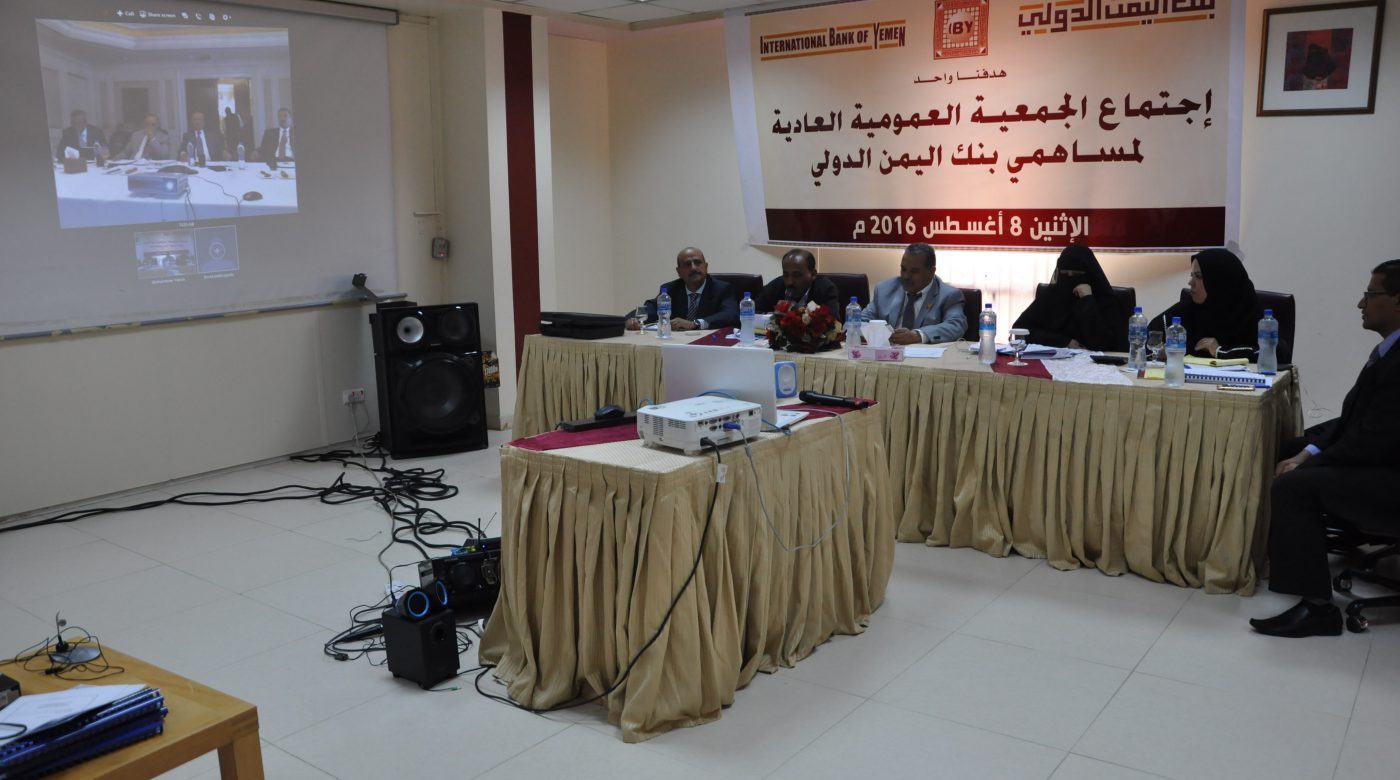 The General Assembly of the International Bank of Yemen approved in the meeting today in Sana'a to raise the bank's capital out of 15 billion to 16 billion and 500 million Riyals. Moreover, The Assembly members approved to distribute the profits among the shareholders by 75% of the nominal value of the share.

The General Assembly discussed the particular report of the Board regarding bank activities during the last year ended December 31, 2015 and the report by certified Accountant overseen for the same last fiscal year. In addition to review the budget and calculate profits for the last fiscal year.

After that, he indicated to the exerted efforts that help developing financial levels of the bank and help attracting the attention of new customers. The improving of banking service based on high professional standards would raise the ceilings of deposits up to all different types and varieties, additionally to replace its function according to the vital controls that achieve high rates of profit, in spite of the circumstances in the country.

He also denoted to the net profits of the bank achieved at the end of the last year reached $ 15 billion, 114 million and 734 thousand Riyals; one billion and a half to raise the bank's capital and two billion, two hundred and seventy million kept as legal reserve.

He stated that the returns through the last year reached 28 billion and 400 million for 23 billion and 700 million Rial at the end of 2014.

He said, "Despite of the difficult economic circumstances and the decline in the country's income because of shrinking oil sales, which led to the decline of reserves to foreign exchange occurred to the Central Bank and the trouble situation in all public banks, but the IBY specially is distinguished by financial stability and an increase in deposits and assets as well.''

He signified that the bank aims this current year to get a higher marketing share in the banking business for individuals that leading to their satisfaction by improving customer service, retention and working hard to make influence on others.

He stated also that the bank launched last June the service of points of sale with approval and support to cards American Express, Master Card and Visa, and all cards for local banks; furthermore, the bank is taking part in the national distributor to enable all bankcards acceptable at all ATM networks in Yemen.

He gave hints to points of sale that would be available more than 500 points and ATM devices subsided to the IBY (similar to smart technical card, EMV) in addition to virtual online cards to provide safety to customers during shopping online.

He added that the bank will launch prepaid card service through the next month to be available to customers without need to open an account in collaboration with master card, equivalent currency to Dollar or Euro. It is acceptable worldwide besides Oil Purchasing Card in R.Y. Locally.

He indicated to that there are several team subsidiaries to the bank working hard to update all different electronic systems for all domains.

In conclusion, highlighting that this banking achievements could not have been reached to this high level unless the well performance on tasks and duties by bank cadre; furthermore, the awareness of IBY to the continual training and qualifying to improve abilities and developing skills of workers at the bank according to high-tick qualifications. He appreciated the efforts of all the bank employees and their utmost determination to improve performance, and working one team to enhance the success of work and provide exceptional services to customers.